Do I go for money or love?

A year ago, I briefly dated a guy who said he owned a company, yet when I learned after a couple of months that he was actually just finding side-jobs in a seasonal situation that did not “cover” him for the year, I realized how financially unstable he was.

I learned that he had been living that way for a decade, barterin 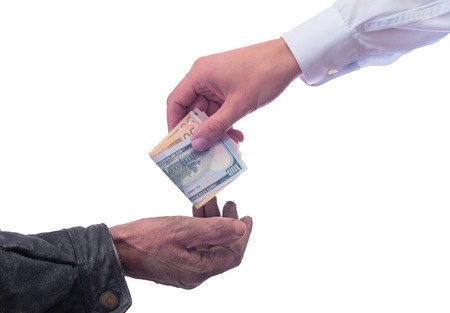 g for rent, living without cable, charming people for discounts, etc., despite how smart and capable he was.  He was 40 years old.  While he says he wouldn’t dream of letting a lady pay for him (so we stayed indoors until I became uncomfortably claustrophobic in my own home), how would someone too broke to order a cup of coffee build a future with me?   I wondered, if we eventually moved in together, would I be paying all of the bills since I don’t believe in bartering and I like a decent place above poverty wages with cable, etc.?

I don’t need a rich man, but I want one with motivation who pays rent and gets a paycheck like a normal person.  I believe that couples should help each other through rough spots, but I don’t want to be the sole provider on a permanent basis.  I broke it off after a few months.

Here’s the dilemma.  I felt a remarkably soulful and emotional connection with this guy, and I still think about him; he is also a very good person.  On occasions, he irritated me, but I also felt joy and peace very often when I was with him and a kind of “this-is-it” feeling like I could spend the rest of my life with him if he had the stability.  We actually spent long weekends together while we dated and shared more than a few intimate stories about our lives and upbringings.

A year has passed, and he recently contacted me, telling me that he had loved me while we dated.  I believe this is true because he was always very kind and loving to me.  My heart ached when he told me his feelings, and I find myself battling again between the polar opposites of love and practicality.  He knows how I feel about his financial instability, and it doesn’t look like he is going to change.  I don’t want to hurt him, and I also don’t want to put myself in a stupid situation, yet I truly care about him and see what we could have on a deeper level.  Do I go for money or love? What do you advise about dating a poor guy?

Isn’t there something just soulfully amazing about guys who live outside of the maddening world of money? I remember going on a trip right after college and I met Ben. He couldn’t care less about money and he had this capacity to love better than any man I’ve ever found since. He ended up moving to my town and we got a place together. Things were amazing… until about the second month when he couldn’t help pay rent.

It wasn’t a huge deal because I had a great job. And then the third and fourth months came and went before I finally realized that I was supporting us.

We would spend our nights in each other’s arms talking about all the amazing things we’ve discovered in our lives.I had some incredibly deep conversations with Ben. I really miss those nights. The problem is that reality always has a way of creeping back in. Since he couldn’t afford to go out and I wasn’t willing to fund our living AND entertainment, we stayed at home–a lot. I was starting to get isolated from my friends and I’d always have to make excuses for why we couldn’t meet them for dinner or whatever. I totally lost touch with all the cool things happening throughout my city and I used to be the girl everyone asked when they wanted something fun to do.

But the love we shared… Oh my God!

Oh how I miss how much we loved each other. He taught me everything I know about opening my heart. Forced poverty wasn’t such a big deal at the time because I was right out of college. I’m a grown woman now and I can say without hesitation that any man that wants to be in my life better have his own life figured out. He doesn’t have to be rich. But he better be able to go out and have fun and, at the very least, cover his own bar tab.

According to Investopedia, The top two are sex and money:

In both cases, one member of the group just can’t seem to get enough of what he or she views as a scarce commodity. However, arguments about money, according to nearly every survey on the topic, generally win out as the top issue. In fact, according to a booklet entitled “Making Marriage Last”, which is published by the American Academy of Matrimonial Lawyers, problems relating to financial matters are a major reason why marriages break down.

We had the sex part down so the only other thing to be unhappy with was the money. More specifically, MY money and HIS total lack of it. Near the end, I couldn’t help myself. Any time he would complain about not having a real job or any money, I would fly off the handle! It seemed to me that a brilliant guy like Ben could easily get a job he loved that he’d love to go to everyday should have been a snap.

It wasn’t until much later that I realized I was condemning him for the exact traits that made me fall in love with him in the first place.

My advice on dating a poor guy

I hate to say it, but his complete disregard for money will turn YOU into a psycho eventually. Unless you grew up poor and know how to entertain yourself with nothing, you will eventually snap and now you’re the one who looks like a jerk.

He loves like an angel but he will turn you into a demon if you end up being the sole financial support for both of you. It would be one thing if he was brilliantly talented at art or music or something that may one day make him famous. But without this impossible dream, you’re only looking at becoming his mother. And I totally get it. For some of us women, this is our only plan for the future: to find a some dude who will never make us have to think about all of this credit card debt again. So it’s unfair for me to say bail on an amazing love with a penniless cherub, but it’s pretty much written in the stars how this is going to end anyway.

There is hope though, girls! If you read any other advice on this website, you’ll discover that we recommend one book over all the others: Rousing the Lion. It’s like the missing manual on how to inspire a man to be great. Guys love it when they accomplish something grand and that they did it all for their queen. Get his book and figure out a way to get this guy excited about his prospects in life. You might just get to keep your amazing love AND have a guy with financial stability. Making this choice between money or love doesn’t have to be a choice. You can have both worlds if you fight for your love and fight for your lover!