How to Train a Man

How to Train a Man

Sometimes you got to help him get what he wants 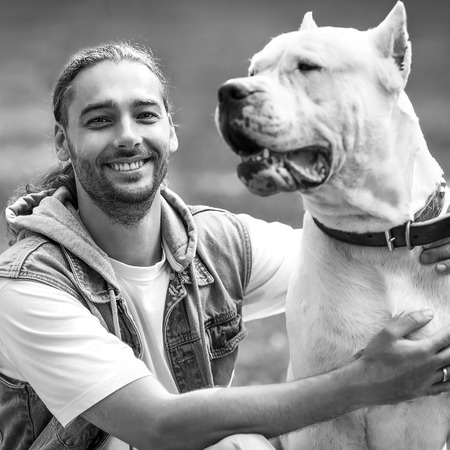 “I got a pretty good boyfriend, he’s just a little rough around the edges. Is there any advice on how to train a man to be a better human being?”

You’re opening up a can of worms when you are seeking out how to train a man! We are talking about human beings here and I’m sure he might have the same question about you. But this isn’t necessarily a bad question. We all have “higher hopes” for the people we love in our lives so we’ll take the bait and give you some insight on how to train a man.

It’s one thing to want to fix some problems, but when you are looking to train him like a dog, then he might have some serious issues that go way beyond what this web page could possibly cover. That said, it’s not impossible to train a man and yes, most of these methods will work on dogs too…

Remember that time he came home drunk on the night you two were supposed to go to the theater and see Hamilton? Remember how mean you were to him the rest of the week? This is exactly the same as coming home to find you dog pooped on your heirloom rug. You come home and start screaming at the dog who probably pooped there hours ago and has already forgotten about it.

In both cases, they are left to wonder why you are being such a psycho. They weren’t currently doing something wrong so what reason do you have for being so upset.

When he does something that is obviously not OK, you need to let a man know immediately. Essentially, if he doesn’t know something is wrong, he will never change it, nor will he have reason to. What if you can’t exactly scold him at the time? Whisper at him, “You see this, we need to have a talk.” This is a very effective way to train a man because then he has to sit and think about what he’s done. You might never need to have your little talk.

Reinforce the actions you desire

Men (and dogs) respond much better to carefully selected words of praise. Whenever he picks up after himself or does the dishes without you asking, praise him! When he makes small romantic gestures, REALLY praise him.

You see, almost all women have the same issue with their men being as romantic as gorillas. Whenever he does even the smallest gesture of romance or thoughtfulness, show that you appreciate that more than anything else in the world. Men like to be rewarded and will continue with the positive behavior as long as there is always a treat forthcoming. And seriously, regardless if your man need any sort of training, always be willing to reward you man for just about anything. It creates an amazing relationship when you both get in the mindset of giving little gifts or doing special favors for each other whenever it pops into your mind.

Want more sweetness from your man? Give him tons of sweetness! This sets a precedent and although it’s not necessarily “reciprocity,” Someone who’s always getting showered with attention will start thinking about how they can pay you back. Besides, who wouldn’t want to be in a relationship where they are free to give everything in their heart?

The best way to get a dog to stop begging is to completely ignore him. When your guy drops his socks in the front room, now is not the time to start nagging. The best thing to do is ignore it. If it really bothers you, you may kick the socks under the couch. Once he runs out of socks, he’ll learn his lesson. The key here is to not reprimand him. This will only switch on his rebellious nature. He’ll do more of whatever you nag him about.

When a puppy reaches alpha dog status, he doesn’t have to work for much anymore. Never let a guy think he’s got you so in love that you’ll do anything. That is when his true nature will come out. He’ll stop doing all the things he did to woo you and just sit back and enjoy the attention.

You can still be very giving to a man, but you need to challenge him every once in awhile. If he’s always hounding you for sex, ask him to paint your toenails first. He wants to drag you along to a monster truck rally? Tell him you need a 15 minute neck massage. A REAL neck massage and not just a half-assed ploy for sex. If it’s something he really wants (even if you want it to), make him do something to “earn” it.

“That’s so not sexy”

Whether you admit it or not, guys like to feel sexy also. If there is something he does constantly that calls into question his status as a human being, tell him it’s not sexy. A man would rather wrestle a lion than lose his outlet to sexual release. If his video games just don’t do it for you, be blunt and tell him that not only does it not make you want to sleep with him today, it’s grossed you out for awhile!

This is not about withholding sex. This is about letting him know that this thing he’s doing over here makes you not see him as the virile warrior you want to see him as.

Mom was the master at this. Remember when you got a bad grade and your mom made you clean out the garage? When a man really blows it, they have to DO something to show how sorry they are. Besides, the time it takes to clean the toilet will give him a great time to reflect on what he’s done. This is a great way to train a man.

Men love to be pet a lot too! Remember to always provide lots of praise and affection whenever he does something you like. Don’t work too hard at how to train a man because you don’t want to train the dog out of a man as much as you don’t want to train the cat out of a woman. This is the essence of animal magnetism. The less direct control over someone you have, the more you respect them. When you can control them by simply being irresistible, then you can get a man to eat out of your hand. Who’s a Good Boy?!